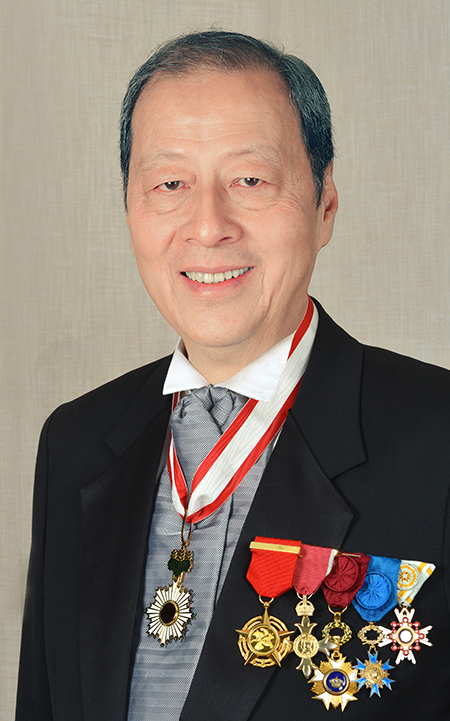 The late Dr Chow Yei Ching (1935-2018), Founder and Chairman Emeritus of Chevalier Group, hails from Zhoushan, Zhejiang Province and was born in Shanghai. In 1970, he set up a 10-person company and operated as the sole distributor of Toshiba lifts and escalators. The Company has now developed into what it is today, the Chevalier Group, a reputable diversified global conglomerate. The company name, "Chevalier" is a French word meaning "Knight", signifying the untiring spirit of Dr Chow and Chevalier Group's staff members in achieving outstanding results and providing the best quality service to customers.

Dr Chow tirelessly served as a member of the Council and Court of various universities and attached great importance to the development of education and was a firm believer in the nurturing of talents. The presence of Chow Yei Ching Building and related facilities in many universities in Hong Kong and Mainland China has profound impact on the development of higher education. In recognition of his contribution and efforts, Dr Chow received honorary doctorate degrees from The University of Hong Kong, The Hong Kong University of Science and Technology, The Hong Kong Polytechnic University and City University of Hong Kong. He was also appointed Consultative Professor by Zhejiang University and Lecture Professor by Sichuan Union University of The PRC. Dr Chow also promoted the establishment of the “Chevalier Culture & Education Foundation” with the aims of fostering cultural, artistic, academic and educational exchanges.

Dr Chow actively participated in charity work and community affairs over the years. To name a few, he served as the Vice Patron of The Community Chest of Hong Kong and was the Vice Patron of The Japan Society of Hong Kong, the Permanent Honorary President of the National Taiwan University – HK Alumni Association, the Permanent Honorary President of the Hong Kong-Shanghai Economic Development Association and the President of the HK Association of Chado Urasenke Tankokai, Inc. In addition, as an avid pilot, he had never forgotten his passion for aviation and also joined the Hong Kong Air Cadet Corps in 2006 as the Corps' first Honorary Adviser to help promote aviation to youngsters through different aviation education programs and disciplinary training. In 2009, Dr Chow and his fellows established the International Ningbo Merchants Association Company Limited and he served as the Founding President, aiming to further promote the economic development of Ningbo. Dr Chow was awarded the title of “Honorary Citizen” of Ningbo and “Model Compatriot” by Zhejiang Province in recognition of his contribution. Apart from his active participation in community affairs, he also served in various public services and was the Standing Committee Member of the Shanghai Committee of the Chinese People’s Political Consultative Conference. In addition, Dr Chow was appointed as the Honorary Consul by the Kingdom of Bahrain in 2001.

Dr Chow was awarded the Gold Bauhinia Star by the Government of the HKSAR in 2004 for his great contribution in the local and commercial sector and passion in education. His enthusiasm in promoting commercial and cultural ties between Hong Kong and other countries was also widely recognized. He was awarded in 1991 Officer of the Most Excellent Order of the British Empire by Her Majesty, Queen Elizabeth II, in 1993 Officer in the Order of the Crown by His Majesty, the King of the Belgians, in 1996 Officier de l’Ordre National du Mérite by the French Republic, in 1998 The Order of the Sacred Treasure, Gold Rays with Rosette and in 2008 The Order of the Rising Sun, Gold Rays with Neck Ribbon by His Majesty, the Emperor of Japan respectively.

Go Back Go to top